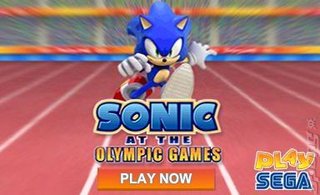 SEGA has launched a new web portal aimed at grabbing the attention of casual gamers and those with a penchant for social networking.

Dubbed PlaySEGA, the site features a "selection of arcade, word, card, puzzle, quiz, Sonic and sports titles". Some of them have been ported from other platforms, such as Brain Assist (originally for the DS) and Sonic at the Olympic Games (with no sign of his mate, Mario - originally for mobile). Other titles are brand new, such as Ice Shuffle, Hollywood Adventure Quiz and Aquatic Word Burst.

The site will track player's scores, as well as rewarding them with 'PlaySEGA Rings' for each session on the site. What's the point of these rings? That's where the social networking aspect comes in. They can be used to buy and customise an 'Escape Area', which SEGA says "is essentially their very own profile page".

So, how does SEGA make money out of this? It wants you to upgrade to the PlaySEGA VIP area of the site, which will be rolled out soon. For a "small charge" players will get access to extra games, some created specifically created for the portal and some drawn from SEGA's back catalogue, including Columns, Puyo Pop, Chu Chu Rocket, Sonic The Hedgehog and Super Monkey Ball Tip n? Tilt.

?What started off as a small project within the SEGA Network Group has now caught the imagination of the entire company?, explains Nick Pili, network business director for SEGA of Europe. ?I have suggestions for new games filling up my in-box, from the CEO, to staff I?ve never even met over in our Japanese, European and US offices.?

?SEGA fans and new gamers alike can now come together in one place and enjoy some of our most exciting vintage and new titles?, continues Pili. ?There was a story out there recently that we have a locked vault full of retro SEGA classics in Japan. Well, it?s true ? and we?ve been given full access to a lot of the properties in it.? Lovely, isn't it?

It's a damn sensible move on SEGA's part. While the SEGA brand doesn't hold as much stock with hardcore gamers as it once did, there are legions of potential casual gamers out there who used to own a Mega Drive and remember the name with fondness.

You can have a gander over PlaySEGA here.
Companies: SEGA
Games: Chu Chu Rocket! Columns Puyo Pop Sonic The Hedgehog