PS3-exclusive accused of being vapourware 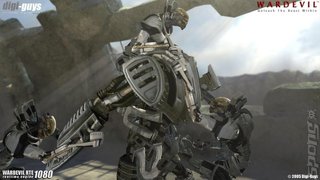 Digi-Guys, the developer behind the elusive PS3 exclusive action title, WarDevil, is suing an ex-employee for claims that the game is vapourware.

According to a post from an admin on PS3Forums.com, where the allegedly slanderous allegations were made - "Digi-Guys have stated that they have initiated legal proceedings against their ex-employee, who has been posting on this forum under the username of 'LeeArcher'.

"Whilst this matter is being handled via legal channels Digi-Guys cannot directly address, discuss or engage in any matters relating to this subject. Digi-Guys have stated that they understand that this will be frustrating to the real fans of Wardevil out there but at this time are unable to comment further."

LeeArcher, whose original posts have been removed from the Forum, wrote, "they are no where near completing this game based on the information I have. they have been working on the same 3 levels, one of which was recycled from a previous 'attempt' at the project before ingntion/utv merger for the last 3 years. It?s supposed to be a game with 20 hours worth of play, and a 2 hour feature film? get real. the levels are so small you could walk though them in 5 minutes and be like 'what? that?s it? **** that'".

Although Digi-guys claimed Archer was an ex-employee, at the time of posting he claimed to be an investor in the company.

The game itself has been in the realm of public knowledge since 2004, but very little has been seen of it. It was originally set to be on the PS3 and 360, but is now just being worked on for Sony's console. Digi-Guys' shutdown over LeeArcher's comments, the lack of details about WarDevil and its extensive development period have lead some to believe that Archer's assertions are true.

YenRug 1 Dec 2008 14:35
2/4
No, they're suing him because, as a former employee, he would have had to sign a Non-Disclosure Agreement which means he agreed not to discuss the company, nor its products, with anyone outside of it, or does not have a legal reason to know it (i.e. investors). If he is an investor, as he has apparently claimed, then he does have right to air grievances about a company that has his money, however, that just means he's an idiot because revealing information such as this would depress the share value; on the other hand, that may be deliberate, with the intention to buy up more stock at a cheaper price, but that would be classed as insider trading and he'd be in even bigger trouble for breaking criminal law, not just be in breach of a civil agreement as an ex-employee.

Either way, he's showing himself as being none too bright, if he provided enough information to positively identify who he is.

FC2Rocker 2 Dec 2008 00:02
3/4
sued? thats a bit of a wild statement. I don't think they have sued him. I would correct that for sure unless they can show you a court order. its too fast to have sued someone over this.
as for digiguys, based on what this guy has said, investor, ex employee or not, I tend to believe him. by coming down on this guy in the way they did, they just validated his claims.

LeeArcher was right. 22 Feb 2009 13:00
4/4
This guy was telling the truth. More info about it from more sources is about to be brought to light.
Posting of new comments is now locked for this page.