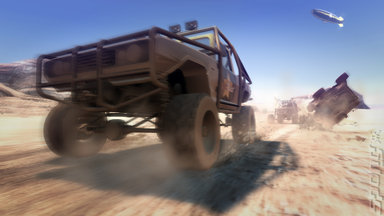 Richard Scott, MD of Axis, the company behind the MotorStorm trailer that has caused such a kerfuffle of late, has defended the use of rendered footage in game trailers.

Scott believes that not only are target renders important as goals for developers - they're also important for building hype around a game.

"Should these movies be released to the consumer?" asks Scott in an opinion piece on Develop. "My first reaction is yes, of course. If you want that same level of excitement that is being felt internally at the developer and publisher to transfer into the gaming community then it makes perfect sense."

This follows Nigel Kershaw, lead designer on MotorStorm Pacific Rift, erupting in a flurry of cuss words over criticisms of the pre-rendered footage used in the E3 target video for MotorStorm.

"We live in a world where everyone is hungry for content of any type and if you have great content and an exciting product people will be all over it.

"Are there some risks? Yes. There is the much-discussed matter of making sure you don?t misrepresent the animation as any type of in-game content but, if we have both done our jobs correctly on the creative and the trailer works delivering on all fronts, people will be too busy salivating at the thought of what the playable experience will feel like to get caught up in that", Scott continued.

We could of course make the whole thing easier by having the words "Target Render - the actual game will only look something like this" all over the trailers.
Companies: Axis Evolution
People: Nigel Kershaw Richard Scott
Games: MotorStorm MotorStorm: Pacific Rift