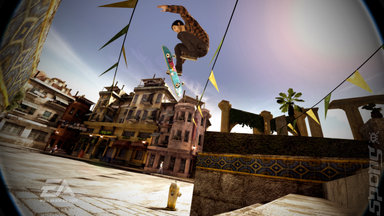 All Images (3) »
Electronic Arts has put a street date to Skate 2, the upcoming sequel to (this won't surprise you) skate.

The company also dished up details on the inventively-titled Graphics Creator. This little tool enables users to create custom graphics for their in-game hats, decks and shirts. The tool is due to launch next month on the official skate. website. Details of how we'll be able to import the graphics to the game have not been dished up.

EA also gave mention to the Throwback Pack. This is a download that will be available to North American pre-order customers. It includes, in EA's words, "a variety of retro stylings including, tie-dye t-shirts, Skate or Die apparel, Robot and ?Window Shade? sunglasses, gestures circa the hippie-age and much more!" Because, you know, retro skateboarding's all cool and just waiting to be monetised some more... Thanks, Stacy Peralta!

You can bone up on Skate 2 over on SPOnG's dedicated game page. SPOnG also has some new screen shots on this very page. Enjoy! There will be a review of Skate It for the Wii up on SPOnG later today.
Companies: Electronic Arts
Games: skate 2