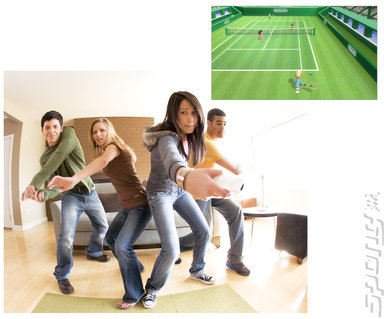 The ever-vocal Peter Moore, head of EA Sports, has said that Wii Sports is hurting his brand's sales on Nintendo's console. He has also, effectively, said that there's a general disinterest in what he calls 'authentic' sports titles from Wii owners.

“The challenge we face is that that consumer gets ‘Wii Sports‘ right out of the box and that’s a sports experience that’s good enough for a lot of people. That is a challenge for us at times”, said Moore.

SPOnG's a little dubious about that. For one, Wii Sports (while great fun) comprises little more than a demo for each individual sport featured. No one with more than a passing interest in golf games is going to be happy with the nine holes Wii Sports offers for too long - unless, of course, Tiger Woods Golf is so much more weak?

Secondly, only four sports are represented there. Where's the footy, the ice hockey, the American football? Where's the damn cricket?

Without some pretty hard marketing research figures to back that up, as far as fatuous arguments go, that one is verging on the obesetuous.

Thirdly, look at THQ's Big Beach Sports. Despite receiving a Metacritic score of just 44, it was still in the UK Top 10 two months after release. Clearly Wii owners are hungry for a particular breed of casual sports game.

Skipping ahead to Moore's closing words on the subject, he uttered, “The bottom line is we knew what we weren’t doing right. We’ve corrected that. We’re seeing progress. Is it easy? No. Will we ever see attach rates for authentic sports games, for licensed sports games, on the Wii to the same we see on 360 or PS3? Probably not in this cycle. Are we going to see continued growth of both? Absolutely."

The old "ask yourself a question then answer another one" game gets 2/10 on any platform.

In saying EA has corrected its strategy, he is presumably referring to the introduction of 'All Play' branding to Wii versions of its sports titles. Taking a look at Madden on Nintendo's platform, the '08 version, released in 2007 sans 'All Play' functionality apparently sold 174,000 copies in its first two months of sale in the US, while the '09 follow-up, complete with 'All Play' modes, sold 176,000 copies.

When you add it all up, it would seem that what Moore is actually saying that Wii owners just aren't that interested in the kind of sports title that EA makes.

So, what's EA's strategy? To go at it like an inconsiderate lover. “We’re going to keep pounding away. We know what we were doing wrong. ‘Tiger' is EA’s number one selling game on the Wii period. Period!”

First off, Tiger Woods Golf. Played it once on the 360. Absolutely HATED it, I would rather play Links 2004 (Which I thought was an absolutely brilliant game) for a month of Sundays than Tiger, ever again. My primary complaint, and this was a total dealbreaker, was that in Tiger, ballspin is applied after the ball has been struck and is airborne. Made me want to puke on my controller, utter ballocks.

As for Madden "2009" All Play on the Wii, my mate got it for his birthday, and before I could convince him to return it without breaking the seal, we busted it out. The 2009 in the title is a joke, the game is a rebranded version of last years game, and has nothing in common with the other 2009 versions of the game. If you actually like listening to Madden this is a good thing, as he's been largely replaced in his play-by-play duties in the "next gen" 2009 iterations. The other difference (aside from All Play functionality), and potential bright spot, is it uses the playbooks from 2008 as well. This actually confused me for a second or two, but I quickly adjusted, as I'd played much more 2008, and prefer the 2008 playbook for my beloved San Diego (Super)Chargers (RB Circles out of the 'gun instead of split backs, etc...) So if rebranding last years product is exemplary of EA's commitment to the Wii, I'm pretty nonplussed by it.