God of War Creator: Gears of War 2 for Game of the Year

GoW man bigs up GoW2 with loads of naughty words 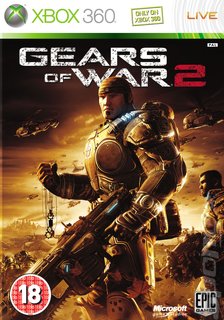 David Jaffe, creator of the God of War series, has transcended his Sony roots to say that he reckons Gears of War 2 is his game of the year. A little more predictably, he also thinks that God of War III (which he is not working on) is looking pretty good.

In a post on his blog Jaffe wrote (in true, cuss-word riddled style - if swearing offends you, look away now), "I saw GOD OF WAR III when I was in Santa Monica last week. I can and will not give away details. But I think it's ok for me to say two things:

"a- HOLY HOLY HOLY FUCKING HELL!!!!
I thought GEARS OF WARS 2 looked about as good as a next-gen game could look....and that game is currently- and will probably remain- my game of the year. And hell, I think I actually get to vote on that kind of stuff in some circles :) And unless I get blown away by POP or something else I missed, GEARS 2 is the SHIT....this year. Dudes and dudettes, fucking WAIT till you see the amazing graphics...just fucking wait. And yes, Xbots, accuse me all you want of being a Sony fanboy. Just remember two things:

"#1- I just said GEARS 2 is the BEST fucking playing and looking game of the year....better than any PS3 game. And there are some damn good PS3 games, I feel.

"#2- FUCK YOU! I ain't no fan boy but this mother fucking game looks like nothing you've ever played... and you can hold me to that when this thing hits and when they start showing gameplay footage. It looks like a painting come to life- it's THAT good looking."

Since Jaffe now heads up his own independent (albeit Sony-exclusive) studio - Eat, Sleep, Play - he can say such things.

Jaffe's sighting of God of War III also lends credibility to the claims of one anonymous source who claims he or she also saw the game last week - along with getting wind of a slew of other Sony-related news.

SuperSaiyan4 24 Nov 2008 13:26
1/6
Gears of 1 looked better imo, and Gears of 2 is actually s**t poor gameplay and terrible online soo many of my online friends who loved Gears 1 hate the new one, I have sold my collectors edition of the game.

The only game I think that should get game of the year is Fallout 3 that is a game that truely gives the meaning to the word 'Game' it has tons of replay value and gaming hours.

If only other developers could make anything near what Bethesda can make all games could be as good as worth buying.

I think Jaffe is being a bit stupid saying Gears 2 looks better than any PS3 game because I wonder if he saw MGS4...

Oh and calling this gen 'next gen' is also stupid.

Elpzoculsin 24 Nov 2008 23:57
2/6
@Supersaiyan4
Hmmm, who should I trust? The creator of one of the greatest games of all time (God of war), or some random dude named SuperSaiyan4? gee let me think about this one...
more comments below our sponsor's message

OptimusP 25 Nov 2008 09:01
3/6
SuperSaiyan4 wrote:
The only game I think that should get game of the year is Fallout 3 that is a game that truely gives the meaning to the word 'Game' it has tons of replay value and gaming hours.

If only other developers could make anything near what Bethesda can make all games could be as good as worth buying.

You should look up a small swedish publisher called paradox interactive and check out all their grand strategy games (if you don't like strategy games don't bother though) and the Mount and Blade game they got, think Oblivion without magic but with a lot more medieval-inspired options (like...capturing your own set of castles). Fantastic games with so much replay value, fantastic mod-community and constant patches from the makers. Sure the games don't look that good, but boy are they entertaining.

SuperSaiyan4 wrote:
Oh and calling this gen 'next gen' is also stupid.
Why you think Nintendo is calling their new-gen? While games-wise it is only slowly reaching that "new" status, it has broken down the traditional "next-gen" structures and replaced them with new ones.

MRXBOX n VAN BC 25 Nov 2008 14:48
4/6
Wow the man has a right to his opinion ! Mine is iv played a ton of Xbox and have been on Many Leader Boards ! I have no want for gamer score or achievements . I just want a game where i can get a fair shake at winning ! That's it . Well maybe one more thing . A SCORE BOARD THAT WORKS . One that KICKS the cheats and shows the map pimps for what they really are !