7-Eleven Gets into Video Games Sales

Gamestop sales down - convenience store gets in the game 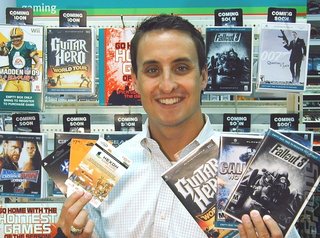 A pint of sugar and Call of Duty please - oh, and hand over the till.
As GameStop posts quarterly net earnings of $46.7 million (Ł31m or €37m) down from $52.0 million (Ł34.6m or €41m) for the same period last year, 7-11 leaps into game retail in the USA. The chain has already dabbled in MMOs with the pre-paid Nexon cards, but now it's entering the choppy waters of console game sales.

Says the superbly named, Michael Jester, (7-Eleven category manager for gaming and electronics) “We think video games will be a great year-round seller for us"

"Whenever a big-name game is released, it creates instant demand, and we plan on being there to meet it."

We're intrigued by its definition of gaming though, "Most top-selling video games have action- or battle-oriented objectives popular with male players. Many of the online MMOGs, however, are classified as 'casual', 'role-playing' or 'experiential' and attract a higher percentage of female players", claims the company.

The games that the chain aims to sell would indicate that it's not messing around in the world of casual:

So, as confusion reigns as to whether video games are recession proof or not, at least you can pwn some n00bs with your Slurpee.