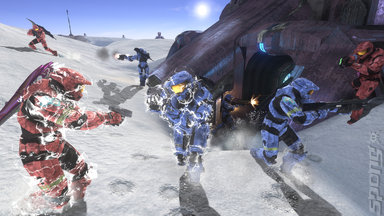 Bungie has acknowledged that installing Halo 3 to your Xbox 360 hard disk - courtesy of the New Xbox Experience - will hurt the game's performance.

A post on Bungie's website tells us, "The 'New Xbox Experience' was released today and one of the new features allows you to 'install' your games to the HDD. While you still have to keep the original disc in the tray, installing to the HDD can make some games perform a little better while also putting a little less wear-and-tear on your DVD drive.

"However, this isn?t to say that ALL games will see optimizations from being installed. In fact, in the case of Halo 3, the game will actually see increased loading times. Several websites have reported the results of tests to gauge how some games perform after being installed to the HDD for Halo 3 and their tests indicate that in some cases, the load times are significantly longer. Our own internal investigations have yielded similar results."

Bungie gives a meaty explanation as to why this is. You can read it here if you're so inclined, but the developer explains the overarching problem as follows - "The technical reasons were outlined above, but for a higher level answer, we shipped Halo 3 before Microsoft finalized this particular feature. As a result, we were not able to take advantage of it (or any other potential optimizations we discovered after shipping Halo 3). Perhaps we also coded too close to the metal."

The developer added that it is unlikely to patch Halo 3 to resolve the issue, claiming that the manpower it would take would not be worth the benefit to gamers.
Companies: Bungie Microsoft
Games: Halo 3

What would not be a waste of time is giving us a Halo 1 remake with online play!