World of Warcraft Addiction: How The Sun Got It Wrong 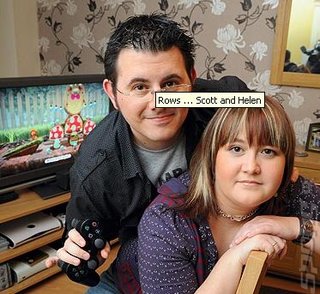 Scott: addicted to COD4 apparently. So, what's LittleBigPlanet doing there?
All Images (2) »
Dear old mainstream media and how it tries to make sense of video games. This time around it's The Sun attempting to inform its female readers of the dangers of video game addiction. Yes, with World of Warcraft: Wrath of the Lich King launching and huge numbers of people not buying The Sun because they are playing it, the paper case studies three couples.

First up: neglected "31-year-old housewife" Maria Valentine of East Preston in West Sussex. Her partner Richard won't stop playing World of Warcraft. "He just wants to stay on the computer permanently and says it?s unfair on his ?guild? of online friends if he?s not there to play with them."

Maybe Maria's plain upset that Richard won't get off the computer because, as the part time model, told Voltcase in another interview, "Hmm.. geekie about me, not as such, I love the computer tho Lol, when not working normally on the net Lol networking etc..."

And we thought that when she wasn't working, she was "31-year-old housewife" Maria Valentine. Silly us.

Next up: "BANISHED to the bedroom, Helen Fendal talks to partner Scott Clarke BY PHONE while he is downstairs with the real love of his life ? a games console." We actually think this is Helen Fendall. Anyway, Scott's addicted to Call of Duty 4. So addicted to COD 4 is Scott that the picture in The Sun article shows LittleBigPlanet playing on the TV.

Finally: and this is our very favourite piece of The Sun journalism, we have Joshua Holden who, "walked out on his pregnant partner rather than give up World Of Warcraft."

This is apparently the same Joshua Holden who posted the following on his Digg page:

" I left my pregnant girlfriend over World of warcrack
thesun.co.uk ? What a load of ballz!!!"

along with the telling comment regarding his photograph, "Love it especially as i'm playing spore!!!"

Spectacular and incisive work there from News International's best and brightest.

OptimusP 18 Nov 2008 14:55
1/9
Aren't their any laws that prohibits the press from publishing absolute bull? Really, if you can prove it, it should be possible (wait, that's how justice works in general *shock!*)

Thats why we have his and Hers PC so we can both WoW together :D

seems the sun is recruiting models for there stories ..... Also Radio 4 interviewed ann-marie and joshua on there saturday morning show. was an amusing listen!

WOW Gold Fan 21 Jan 2009 19:06
6/9
Whoa and it somehow that article made me felt really, really bad for those wives. But then yeah, I thought I was the only one who noticed the video screened on their consoles. I guess I do have to sympathized for those who were not able to work things out with their relationships over a video game. I have to be honest, I am a video game addict as well, I spent hours and hours grinding for wow gold and leveling my character but at the end of the day, nothing beats reality...Family comes first