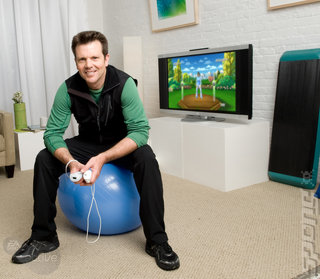 We now realise that he meant, "complementary" - at least we hope that's what he meant, the interview came from Forbes. Anyway, details are now in for Electronic Art's sweaty, Western workout. Before we go granular, you should know that "It?s like having your very own personal trainer in the comfort of your home, offering the promise of a better you, in just 20 minutes a day".

The peripherals (see the pix below) included in the pack aren't all heavy and plastic and Eastern. No way! What you get are:

These, we're told, create, "A New Way to Play". How?? "Slip the Nunchuk into the specially designed leg strap and hold the Wii Remote in your hand to track your movements from both your upper and lower body. A resistance band is also included to increase the intensity of exercises such as bicep curls and shoulder presses."

We're be sounding a tad sarcastic here, mainly because the game is not aimed at us. According to Mr Moore, it's aimed at "a targeted sweet spot... a woman in her mid-30s with two young children that was active--wishes she was more active--and is pressed for time".

A hands, feet and legs-on will be heading your way once EA decides to make us put our smart-arsed comments to the test. We're up for it!

OptimusP 13 Nov 2008 16:00
1/1
He forgot an another potential sweet spot...gaming people who live in underwater castles who are being smartasses but actually could use some exercising themselves?

I hope they get Mr. T to be the personal trainer...
"quite you're jibbajabbing fool! and give me 500 push-ups!"