Maybe marketing should speak to development 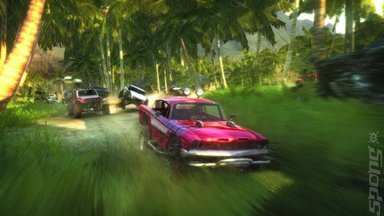 Evolution's Nigel Kershaw - the lead designer on MotorStorm: Pacific Rift has come on with the swearing and the frustration. He is unamused at some people's lack of understanding that because a game is sold as looking super-gorgeous months before the final product release, that final release doesn't have to look as good.

Says Nigel, "Before you do a game, you do a test render that says ?this is the game we want to make, now let?s go make it?. It?s just like writing a game design document. The end result might not look like the render that you did. Who gives a shit?"

Fair enough. No one seriously expects a game design document not to change over the course of a development cycle. It will evolve; it will improve; it will go through QA. It will be honed.

"But", says Kershaw to 1Up "it?s this thing that haunts you, that you didn?t match your target render. Everybody makes such a big fucking deal of it. Who gives a shit? That?s how we make games. If people have got a problem with that, tough.?

All well and good to hear a developer who is passionate about developing. However, note to marketing and project leaders: it's probably a good idea in future to have a large slab of text on the renders released into the wild saying: "This is the fucking test render that you shouldn't give a shit about. If the real game is 50% as good looking, you should feel grateful!"

That way there can be no confusion.

jkl 17 Jul 2009 00:16
7/7
i don't care what the f**k anyone says, motorstorm pacific rift is one of the ps3s best offroad racers. FUEL was another enjoyable racer, too.
Posting of new comments is now locked for this page.