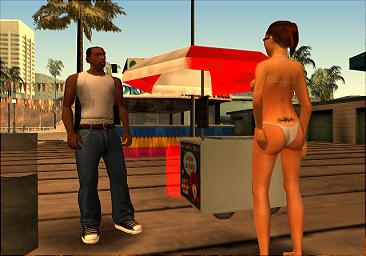 In sentencing 19 year-old Ryan Chinnery to an indefinite prison term last week, judge Philip Statman said, "It is right to observe there is a worrying mirror of conduct between that which the pornography presented to you and that which you carried out."*

Chinnery - who apparently lead a basically normal life working at a groundsman and living with his girlfriend - was convicted on two charges of sexual assault carried out last year. Two more charges remain on file.

Most of the mainstream media coverage has, however, concentrated on the fact that the youth played a version of Grand Theft Auto. This, according to prosecuting counsel, Eleanor Laws, "may go some way to explaining his attitude towards women".**

Judge Statman also brought up the subject of the video game, saying, "I know part of this case referred to something called Grand Theft Auto.

"While it appears the defendant does not accept it influenced his conduct on that particular evening, it could not have helped him, I would have thought, in all the circumstances of the case."***

That evening had apparently seen Chinnery prowling "an area around his home in Ashford, Kent, in his car late at night, high on cannabis and alcohol..." **

As far as we understand it, GTA-related crimes now include:

US Homicide. and here.

In terms of being blamed not just for single crimes - and now attitudes towards women - the GTA series is now ahead of Counter-Strike and Mortal Kombat as the blame game.

Hoops 4 Mar 2009 20:06
1/1
Seriously... People need to stop blaming video games for crimes. If you're stupid enough to think that you can do something in real life just because you can do it in GTA, you need a major reality check. People can blame the gaming industry all they want, but the bottom line is that there are plenty of people out there that get their kicks from PLAYING the game rather than emulating it. Eliminating violent games wouldn't solve anything... People prone to violence and breaking the law will still do it regardless of whether they have a game to blame it on or not.
Posting of new comments is now locked for this page.