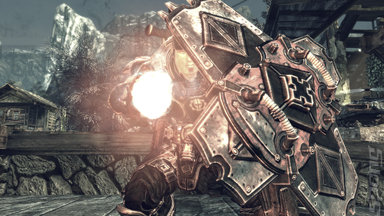 While speaking about the forthcoming launch of Epic's Gears of War 2, Phil Spencer, general manager of Microsoft Game Studios has declared:

"Each holiday season in this current console generation, Xbox 360 has led the industry with the best lineup of blockbuster video games, and we are poised to lead the charge again in 2008 with Gears of War 2."

Now then, does this seem a tad provocative? Or is Phil right on the money? Also, is leading this generation including the Nintendo Wii? And when all is said and done, how does this gen fare against the PS2 or even the handhelds? The PSP and DS don't seem to be suffering. Answers to the Forum please.

For those of you who absolutely must have Gears 2 as the release day hits, Game in Kingston Upon Thames (!) will be having a 'special event' opening at 00:01 on November 7th. The specialness comes courtesy of "Gears of War comic book artist Liam Sharp and Microsoft Game Studios staff (who) will be on location to participate in the launch activities and give away Gears of War 2 merchandise."

Nip over to L.A. and you'll get to meet Xbox LIVE?s Major Nelson, Cliff Bleszinski, voice actors John Di Maggio (Marcus Fenix), Lester ?Rasta? Speight (Augustus Cole), and Carlos Ferro (Dominic Santiago) but it's no Kingston Upon Thames is it?

SuperSaiyan4 5 Nov 2008 14:51
1/4
I wish I could go there and tell MGS why the f**k can't they make any of their own games? All games are made by developers Microsoft has bought out and they call their division Microsoft Game Studios??? What game HAS MGS ever made???

Also all their games are always rushed look at Fable 2 for example.

Daz 5 Nov 2008 14:58
2/4
correct me if I'm wrong, but MS have only had 1 crimbo with competition, so while technically correct isn't saying "we've lead every xmas this generation" a bit big headed of them?
more comments below our sponsor's message

SuperSaiyan4 5 Nov 2008 16:48
3/4
Microsoft will always be the kind of company that hypes things to infinity, are extremely big headed and well hype things again.

They also lie...a LOT which is very well known, proof was with the RROD fiasco and Peter Moore saying it was 33% well I think it was more on top of that whilst RROD was happening Microsoft was saying it was a very small amount of people, in some cases this issue was apparently soo unheard of 360 reps were like 'no one else has had this'.

I might be a fan of the Xbox 360 but not a loyal ass sniffing brown nosing Microsoft fan.

The thing is Xbox 360 is the only place for me where the games are and the appeal is for everything I want, graphics, games, accessories, controller function and feel, online etc.

But although Peter Moore in my opinion was a great spokesperson coming out with them tatoos was over the top but he did talk very well. Again Microsoft hard at work using words to gain the consumers ear just like politics.

However when Microsoft does mention a release date or a promise of sorts they do deliver, like Gears 2 coming out this year and NXE. Also found out that NXE is missing loads of stuff which was NOT announced to the public then cut out but something afterwards so we cannot claim that the new dash was false promises. Its good to know there are a lot of things the team has they they want in there so we can look forward to another great update in the future.

OptimusP 5 Nov 2008 22:39
4/4
Well, they're just abusing the america-centerd gamejournalism, they can't possibly claim they lead the x-mas charge in Japan, or Europe. In the US, maybe.

Also, leading Christmas with the gaming equivalent of a Bruckheimer/Michael Bay summer flick really only shows in how much s**t they are. Stop making these casual games MS...make some proper innovative ones!

At the end of greedmas, Nintendo will just come out and say "we just outsold everyone...combined"

Trauma Center: New Blood, co-op live-saving, now there's a game that should be leading xmas, togheter with LBP and World of Goo.