BioShock for PS3 no biggie. 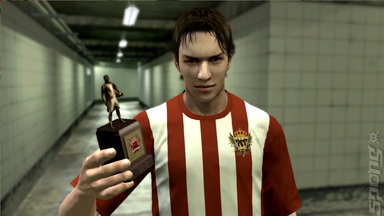 The UK charts are in and Konami has something to smile about - that smile, accordingto Chart-Track Gfk might be slightly less wide than it was last time around.

First the happiness, yes, PES 2009 is top of the Top 10 All Formats. In a twist that may be unexpected given the relative install bases, according to Chart-Track, "The PS3 version of ?PES 2009? makes the most of the two week wait for the PS2 version, claiming 58% of sales, while Xbox 360 accounts for 40% and PC 2%."

"Last year the Xbox 360 launch weeks were neck and neck, but this time around Xbox 360 FIFA?s launch has sold 2.66 times more than that of PES. The launch of PES on Xbox 360 is lower than last year?s game, however the PS3 version?s launch week is up 39%."

So, the updated FIFA has benefited from the work done on it by those busy Canadian developers.

What else is new? Well, Saints Row 2 benefits from TV advertising and general fact that people haven't been able to wander fictional landscapes behaving like the kids from Lord of the Flies would had they landed on an island with bling and cars. It comes in at Number 3. Apparently Xbox 360 owners (73% of sales) love it more than PS3 players (23%).

The rest of the Top 10 is filled with familiar faces all queuing up on the shelves readying themselves to be Xmas Number 1.

An interesting outsider is BioShock, which pops its head up again at Number 14 after some absence. Its reappearance comes courtesy of its PS3 launch.