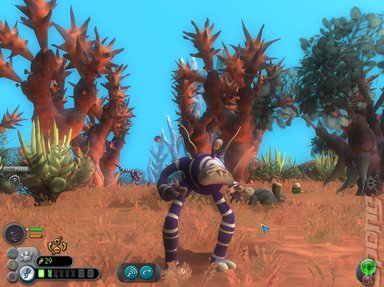 A PC-only (non-Mac) patch-cum-update for Maxis' and Electronic Arts' Spore is available. Sadly, the update does not destroy all DRM - so it seems that Ms Melissa Thomas' law suit against EA will be ongoing. What the patch (detailed below) does do is remove the Bad Baby Achievement.

According to Spore Wikia, "In order to get this achievement one of your shared creations needs to be banned from the spore servers. (But your account will be suspended for 7 days)".

Ergo, in the past, you were actively awarded for the creation of naughty, rude and possibly offensive content content. Tsk and tsk, eh?

According to Maxis, "The focus of this patch is to fix bugs that have been reported via our customer service department and directly from the Spore Community.

In addition, we've modified some gameplay tuning, added a way for you to select multiple items for deleting or banning while in Sporepedia and included a cool new planet style.

To get the patch, launch the EA Download Manager to download and install it. If you didn't install the EADM when you installed Spore, you can get it from
files.ea.com

So, the patch details are:

Graphics/Aesthetics
* Fix for game entry screen turning black when banning a creature in a Saved game
* Fixed issue with flora card in Sporepedia
* Space phase: Fixed graphic issue with water levels not updating properly with terraform tools so that visible water and atmosphere levels will now correspond in the Atmosphere monitor
* Fixed problems introduced via atmospheric and drought terraforming tools
* Improved gaits for multi-legged creatures
* Improved gaits for creatures with 2 limbs, but without any feet

Miscellaneous
* Fixed the ESC key to consistently skip the Spore introduction movie
* Creators: YouTube video uploads are set to private. Go to YouTube.com and log in. Then go to Account >> My Videos to set them to Public if you want to share your videos with the world
* Creators: Fixed limb joints not being selectable behind other limbs
* Tribe phase: Fixed crash while harvesting fruit and fish
* Space phase: Fixed timing bug using Planet Buster during Grox invasion
* Space phase: Fixed destroyed turrets mission
* Space phase: Fixed crash when zooming out to full galactic view from the center of the galaxy
* Fixed for game entry screen staying zoomed in after deleting a game and entering/exiting Sporepedia
* Space phase: Fixed City Hall updating bug. City Hall will now update to correct version if player has chosen a new City Hall during the transition from Civilization phase to Space phase
* Space phase: Fixed Vehicles updating bug. Vehicles chosen in the Colony planner will now update without requiring the player to leave and re-enter a planet’s atmosphere
* Fixed crash when transitioning from Tribe phase to Civilization phase
* Discontinued the Bad Baby Achievement
Companies: Maxis
Games: SPORE