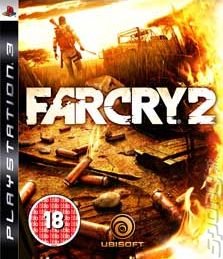 Ubisoft and Sony are very much in love as autumn turns to winter. The French makers of such gaming gems as Raving Rabbids and Assassin's Creed - as well as Prince of Persia - are massively pleased that Far Cry 2 is to have a lovely place in Sony's forthcoming Second Life... sorry, Home project.

Tony Key, senior vice president of marketing and sales at Ubisoft's American operation is more than pleased. in fact he thrilled, "We?re absolutely thrilled to collaborate with PlayStation on this ground-breaking endeavour and have Far Cry 2 be the first third-party video game to have an official space in PlayStation Home".

When we say that the game is getting its own lovely place, we actually mean it's own 'space' - sort of like a New York loft we reckon. It will contain the following:

*) And "interactive area containing a wealth of information about Far Cry 2?s missions and non-playable characters"

*) A "multiplayer game of Mancala that will use bullets as game pieces" - are we buying bullets we wonder?

*) "The opportunity to explore in-game environments including a bombed-out train station that has been turned into an ad hoc café.

*) And, of course, "the ability to launch the game directly from the PlayStation Home space".