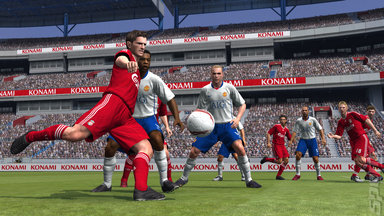 All Images (4) »
PES 2009 hasn't even hit shop shelves yet, but Konami's already announced the first free update for the game.

Due in around three weeks, the update will upgrade four Spanish teams - Athletico (sic - we reckon that's 'Atlético') Madrid, Sevilla, Racing Santander and Valladolid ? to the status of ?officially licensed?. On top of that, Konami states that other teams will get updates to their rosters (sic - we reckon this must mean 'squads') and kits, although it doesn't say exactly who.

The publisher was a bit (but only a bit) clearer on the subject of the UEFA (so-called) Champions League mode. Twelve more teams will be added to the club list, while proper Champions League kits and kit markings will be put on existing teams. A full list wasn't available, but Marseille, Juventus, and Basel will be included.

The Xbox 360, PS3 and PC versions of PES 2009 will be out tomorrow, with PSP and PS2 versions coming shortly afterwards and the Wii version (details of which can be found here) due next year. Look for a review from SPOnG soon.

You can find more about PES 2009 on SPOnG's dedicated game page.

Seriously though, how can they call it 'Champions' League? You can, after all, come in 323rd place in your own league if you're from France, Italy, Spain, Germany, The Netherlands or England and you'll qualify? It's a disgrace.
Companies: Konami
Games: Pro Evolution Soccer 2009

dunno 4 Feb 2009 15:42
3/4
when is the next update because arshavin is in arsenal when is the new update right back soon