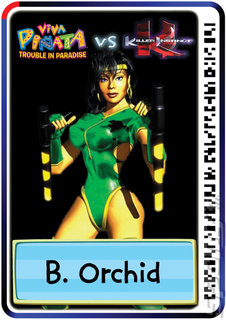 All Images (3) »
In typically odd move to try and capture gamers' hearts and minds (and cash), Rare has put up three Pińata Vision cards on its website featuring... Killer Instinct characters. That means that, using the Xbox Live Vision Cam, players will be able to get Killer Instinct-themed pińatas in their gardens. Specifically, Fulgore, Orchid and Tusk are available.

We know VP's all about getting creatures that shouldn't be able to do the dirty to mate, but cross-breeding such a cutesy, family-friendly title with a beat-'em-up seems like a sure-fire recipe for the next dobbit. (Never heard of the dobbit? That's because Mark SPOnG's mother called it an abomination and a crime against nature then destroyed it.)

So, is Rare trying to tell us something? Maybe Killer Instinct's ready for a comeback? Maybe. But, bear in mind that Gregg Mayles, the creative director on Banjo Kazooie, said of such a sequel, ?If someone came up with some revolutionary idea for a new fighting game, yeah, we might think of resurrecting Killer Instinct.

"But what we?re not gonna do is just say ?okay, there?s this kind of vocal, fairly small vocal minority of real die-hard fans out there that want to see KI, so therefore, we should be doing KI.? That?s not how we?d approach it.?

Dio Brando 16 Oct 2008 13:57
1/1
What Rare should've done was to collaborate with John Tobias to make Mortal Kombat vs Killer Instinct (instead of the upcoming s**tty looking MK vs DC). That would be a great "benchmark" to see if the fans want to see more Killer Instinct and a possible standalone game. imo
Posting of new comments is now locked for this page.