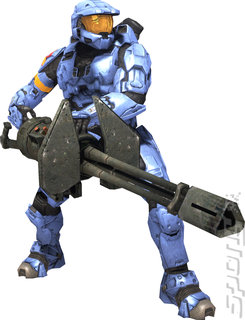 UPDATE: Microsoft has released a for Halo 3: Recon. You can find it, along with the North American pack shot, here.


At its Tokyo Game Show keynote, Microsoft put some more flesh on the bones of what we know about the mysterious new title in the Halo series. For starters, it will be called Halo 3: Recon.

The expansion is scheduled for Autumn 2009. Yes, that's a year away. We know... Microsoft says the expansion "Extends the award-winning Halo 3 experience with hours of new campaign excursions and multiplayer gameplay".

The events take place before the last game, with Microsoft stating things will be viewed "through the eyes of a new hero in the ?Halo? universe." SPOnG can't help but wonder if it's tied to Halo: Uprising, the Marvel comic that takes place between Halo 2 and Halo 3...

Kiroziki 9 Oct 2008 10:30
1/7
Microsoft are really draining the Halo franchise now, its not as big as they think it is, they just thing they can do what SEGA did and expect they can throw out a game and everyone will just come running. They have milked poor Halo to bits now, can't they just let it go for a little while?

bishounen kai 9 Oct 2008 10:36
2/7
I agree, microsoft are really starting to destroy the Halo name, it should of stopped at 3
if Microsoft ARE trying to do what Sega did then it won't work, people are smarter than that
more comments below our sponsor's message

After watching it, I would infer that the expansion will be set, at least initially, in Africa during the Covenant invasion of Earth, Meaning at least some of the action might be simultaneous in the timeline with events in Halo 2.

I am sure that plenty of Halo fans out there are looking forward to getting their hands on this...the haters are gonna do what they do...

I actually think it'll be quite liberating to play as a "mere" human...at least I am spared having a congruent opinion.

There's been *3* games.. wow, that's a lot! How many Call of Duty's have there been? How many Need for Speeds? How about Mario related titles?? Added to that, there's been *1* Halo title on the 360!

Having a C&C style game set in the Haloverse (Halo Wars) is sufficiently different and quite a cool tie in. Then this new Recon game looks to diversify a little as well.

Plus, however much you might hate Halo, it is a massively popular franchise and any Haloverse game will be a cash cow and bought in the millions. Its clever business and also catering for demand.