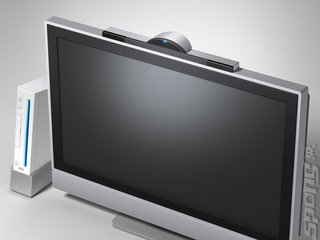 All Images (5) »
Nintendo has put a date to the release of Wii Speak for Europe. The microphone and speaker accessory, along with the Wii Speak channel that supports it, will be available over here from December 5th.

Also tucked away at the bottom of the announcement is the news that Animal Crossing: Let?s Go to the City, which will ship with Wii Speak bundled in, will launch on the same day. The title will be first to make use of Wii Speak, with more promised for further down the line.

No price has been announced for the standalone peripheral, although in the US it will cost $29.99 (Ł17). Similarly, no price has been given for the bundle that includes the game.

Wii Speak enables up to four different consoles to be involved in a conversation. The speakerphone accessory is wafer thin - skinny enough to sit atop the Wii sensor bar (pictured) on a flat-panel as well as old school chubby tube TVs - so that whoever is in the room with you can chip in. The Wii Speak channel will make use of Miis, with the little guys synced with their owner's voice. As well as enabling direct chat, the service gives users the power to send pictures and texts and leave voice messages. Probably rude and smutty ones.

Nintendo tells us, "Wii Speak enables people to connect to and communicate with friends using the free-to-use Nintendo Wi-Fi Connection in a way that is very socially inclusive", seeming to indicate (while not explicitly stating) that the service will be free once the peripheral has been bought.
Companies: Nintendo
Games: Animal Crossing: Let's Go to the City