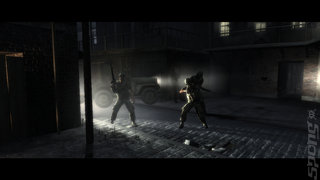 All Images (10) »
Eidos has announced that it will release a sequel to Shellshock: 'Nam '67, going by the name of Shellshock 2: Blood Trails.

It's back to the 'Nam for more bloody first-person action with guns, crazy and a dash of horror.

The story goes along the lines of a plane, carrying a top secret consignment dubbed ?Whiteknight? (sound like coke to anyone else?) has crashed in the Vietnamese jungle. A bunch of special ops soldiers were sent in but systematically disappeared. A month later, one of them turns up alive but completely bonkers. Then you shoot stuff. You can see more in the video below.

The last game was developed by Guerilla, the developer behind the Killzone franchise. Given the fact they've been bought by Sony, however, they weren't available. UK-based Rebellion, the developer of Rogue Trooper, will take the reigns instead.

?Shellshock 2 is very different to any first person shooter you?ve seen before; at times it feels more like you?re in a horror movie than a game? uttered Lee Singleton, general manager of Eidos Game Studios. ?Survival takes on a new meaning as you fight against all sides of the conflict: your enemy, your allies and the victims? the casualties of Whiteknight, an enemy that ultimately has no side.?

Shellshocked 2 is planned for release some time around Christmas on the PS3, Xbox 360 and PC.