Or: how Disney proved that too much media training can be a Bad Thing 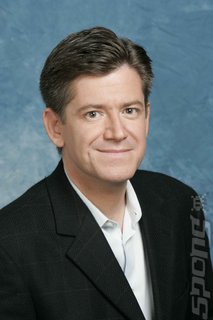 Graham Hopper
Graham Hopper, general manager of Disney Interactive, has been chatting about how Disney and Nintendo, together, did most of the hard work in broadening the games market.

Speaking in an interview, Hopper said, "We and Nintendo have been doing a lot of heavy lifting ourselves. More people are coming to the party." It's funny, but SPOnG missed that. Maybe we were in the toilet.

Hopper also called the Guitar Hero peripheral a toy. "The unit price is so much higher for games like Guitar Hero, where the purchase price includes the toy guitar, and that?s one reason their share of the dollars is high", he said.

Hopper was discussing, among other things, Ultimate Band, Disney's upcoming rhythm title. That game will not ship with a peripheral. Not that Hopper's having a dig! Looking at the tone of the interview, it would appear that he really just thinks of the guitar as a toy.

See, Hopper is one of those games industry executives who comes from a business background rather than a gaming one. He's been at Disney Interactive since 2003, having previously worked for other arms of Disney in licensing and... toys!

Other choice snippets laden with media-trained waffle include, (again on music games with peripherals) "There could be a limit on what people want to buy unless the games keep getting cooler", "Our job is to give them games they didn?t know they wanted" and (on categorising gamers) "It?s dangerous when you put people into buckets".

He also had a bit to say on how Disney is being innovative in the industry by having a game that features a dog with superpowers. Because it's not like that in the film it's based on, Bolt!