Pussycat Dolls Pimp Lips Down Under 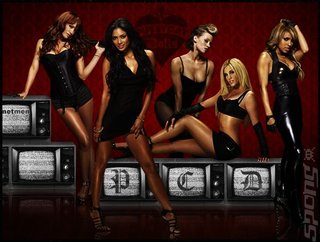 The Pussycat Dolls are going down...

As we are all aware, the group is "the biggest girl band in the world right now"?. You weren't aware of that? Well, you haven't been listening to Universal... their label.

Anyway, the biggest girl band in the world will perform live in front of the Sydney Opera House on October 14th. This is not - repeat not - busking. Apparently, the Opera House key has been lost (or swallowed by an opera singer). That last bit isn't true.

The show is part of a team-up between Microsoft Australia, Tourism Australia and the Universal Music Group to promote Lips, Microsoft's upcoming karaoke game and... well, themselves. The companies will put on shows throughout the Australian summer at iconic Australian locations, calling the series of events Xbox Sounds. Tickets will be free, dished up through various promotions in the lead up to gigs.

No other events have been announced yet, but SPOnG's holding out for Bon Jovi on top of Uluru (or Ayers Rock if you're all last century and that). With no ladder and a very limited water supply. That'd be like, totally rockin'.

deleted 29 Sep 2008 19:48
1/1
ill be holding out for a roy chubby brown version of alice followed by a meatloaf 8 hour version of bat out of hell, of course i am lying
Posting of new comments is now locked for this page.