PES 2009 Gets More Official by the Second

Top-tier French and Dutch divisions brought on board 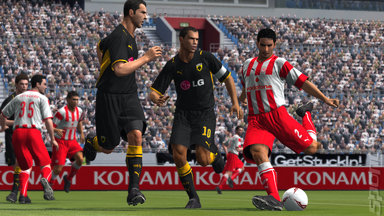 All Images (3) »
Konami, in its latest gambit in the football wars, has just announced a couple of new licenses to bolster its credibility in Pro Evolution Soccer 2009.

Namely, the Dutch Eredivisie and French Ligue 1 have been signed up in their entireties.

They join Manchester UTD and Liverpool FC, which were announced a couple of weeks back.

Other licenses that Konami has grabbed to date include FC Barcelona, Real Madrid, Inter Milan, FC Porto, Zenit St. Petersbourg and Brondby IF.

International sides include the likes of Netherlands, England and Italy.

If great big hulks of concrete and steel are your thing, you might be turned on to know that "faithfully recreated" versions of the Stade de France, Stadio Olimpico di Torino and the new Wembley Stadium are all being included for the first time.

You can see some new screens relating to the signings below, then find even more over on SPOnG's dedicated game page.
Companies: Konami
Games: Pro Evolution Soccer 2009