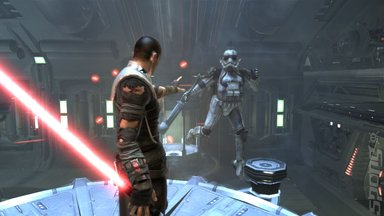 Nintendo follows that up, with renewed stock pushing Wii Fit and Mario Kart Wii up three places to Numbers 2 and 3 respectively.

EA suffers a bit, with Mercenaries 2 dropping 65% of its sales to fall to Number 6. It's the only publisher other than Activision to get fresh titles into the Top 40, however, with Warhammer Online breaking in at Number 4 and Crysis: Warhead landing at Number 21.

Also, the Apocalypse started in earnest today, with SEGA's Mario & Sonic at the Olympic Games dropping out of the Top 10 to Number 13.

Activision Blizzard does well out of Guitar Hero III, with the game rocking up at Number 12, an impressive 15 place climb on last week. It doesn't do quite so well out of On Tour, however, with the handheld game dropping waaaayyyy down from Number 8 to Number 23.

Next week, watch out for Wario Land: The Shake Dimension, Pure and Brothers in Arms: Hell's Highway.

You can see the Top 10 in full below

"Yeah we made the graphics like the Snes, production costs us about 8p per unit and we are selling it for Ł200.00 with the wii suit, where even pissing can be replicated 1:1 on screen!"

really i cant belive people are still buying into Nintendos s**t, its really overboard now, even capcoms great games were ignored, but fecking Wii Music will top everything, and all you do is move the Wii Mote while pressing any Button!!!! seriously that s just a piss take, its like he just cant be arsed making GAMES anymore.

At least we know EA`s evil! and there games actually do have some gameplay.

But look how its always Ninty in the top 10!!

yeah, cos we all know it's much more fun staying still and pressing buttons, whatever was he thinking? doesn't he know people who play games detest exercise?

answers on a postcard

SuperSaiyan4 23 Sep 2008 11:03
3/8
The Nintendo Wii is fun but its lacking games they all look pretty crap and didn't Nintendo at one point say the console will be cheap and so will the games??

Ł40 a pop for a Wii version of a game that looks like PS2 quality or Ł40 for the same game on the Xbox 360 / PS3 with this gen quality and extra features and even downloadable content and or online gaming?

really i cant belive people are still buying into Nintendos s**t, its really overboard now, even capcoms great games were ignored, but fecking Wii Music will top everything, and all you do is move the Wii Mote while pressing any Button!!!! seriously that s just a piss take, its like he just cant be arsed making GAMES anymore.

At least we know EA`s evil! and there games actually do have some gameplay.

But look how its always Ninty in the top 10!!

Christ, is this argument still happening? Get over it guys!

Whatever you think of Nintendo, or the Wii, it really doesn't matter.

I always think of Nintendo as being a bit like a pop group like Girls Aloud, sure they can be fun to listen to, and they're bound to hog the charts with each new song, but ultimately I'm more fond of indie groups who are often niche and can fail to make the charts. It doesn't mean that Girls Aloud should stop what they're doing, just that I appreciate something other.

Or put it another way, the Nintendo Wii is a bit like a Ford Focus. Everyone has one, they are good value, they do the job, but really I'd want an Aston Martin DB9 if I could afford one. That doesn't mean that Ford Focus should be scrapped just because it is considered inferior to the DB9...

So, you don't like the Wii? It doesn't have pretty graphics? It doesn't have the games? SO WHAT! Go play the 360 and PS3 then and have fun. In the meantime, Nintendo will quite happily raise a new generation of gamers who in turn can provide profits to the gaming industry in the future.

And honestly, I disagree about the graphics and available games too. I like the graphics on the Wii, I loved the look of Mario Galaxy, loved Paper Mario even more, I think that Wii Sports looks perfect for what it is, as does Wario Ware, and many more are perfectly functional for the game style. I acknowledge that they aren't up to PS3 standards but in most cases they can't be considered terrible.

And there are plenty of games, providing you're willing to set your expectations aside. I'm not going to start listing all of them but I would like to point out that the Wii also has the Virtual Console which has the excellent Sin and Punishment (N64) and Super Mario RPG (SNES) - both great games that I hadn't played before and both as good as any full price new title!

deleted 23 Sep 2008 12:54
5/8
Ive played all those games before VC is good for reliving 10 mins but it doesnt fill the gap, agreed Super Paper Mario is good and there are good games, but the point i was making was, that nintendo is so full of them selfs now with hit after hit (based on casual gaming) that ME/I have been forgotten, next gen they will be crawling back to the core gaming, why ignore us now??

10mins? I can play my VC games for hours at a time and still want more.

10mins? I can play my VC games for hours at a time and still want more.

maybe it`s my age or the fact i`m becoming ever more knee high in offspring, but i cant play games for along time anymore, in fact a hour and half on halo 3 is about all i can manage and that s every couple of nights.

i want games atht give me a great 30 mins but doesnt involve swinging my arms about or reliving my childhood years of gaming, i have respect and know the palce retro holds in my heart, and more modern classics as FF7 and Goldeneye, once dominated my life, but i now just want a quickie every now and again and i want that i HD, with Eye candy that burns, Sound that deaf`ens me and a control layout i can pick up and play with out need a manual or simplfied waggle.

Daz 24 Sep 2008 02:16
8/8
hopefully it's the drain on your resources because I'm 24 and I don't let that stop me from spending hour reliving the days when original IP's where indeed original and not trying to copy other games
Posting of new comments is now locked for this page.