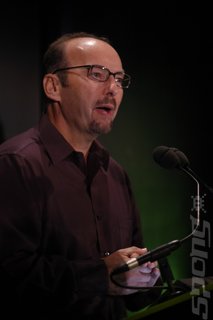 Peter Moore
Peter Moore has gone into detail about what sounds a little like a one-man war with Sony back in his days as head of SEGA of America and then Xbox Worldwide.

On how the PS2 "killed the Dreamcast" (rather than the latter committing ritual suicide?), Moore said (in an ingenious stroke of back-handed complementing), ?I was angry with Sony at the time, but in their shoes I probably would have done the same thing. They did a tremendous job ? and it's a story they repeated in 2005 with Killzone ? where they promised the consumer something they probably believed they were going to deliver, but they never did. PlayStation 2 - it was the emotion engine it was games coming to life, Real Player was going to be on there, a full network browser? and they just never delivered.?

He then pointed the FUD (Fear, Uncertainty and Doubt) finger at Sony, accusing the company of something Microsoft has often been accused of. ?...what they did was place doubt in the consumers' mind?, he said.

?It was pre-emptive guerrilla PR, in the same way that three E3s ago I got lambasted for what I did with Xbox for 360, because I was determined we were going to show real footage even if it was alpha or beta. And then Sony came up with that Killzone video ? and they still haven't shipped the game! Have you seen the video?! The game will never be the video! But what they did again was they placed doubt. I mean it's a classic PR tactic.

?...But [Sony] were brilliant at FUD ? you know, fear uncertainty and doubt. It was a massive FUD campaign. The consumer thought twice and they started to read, 'can the Dreamcast make it?' It had a tough time in Europe, it had a really disastrous time in Japan.?

If that hasn't convinced you of Moore's attitude towards Sony, check out his language as he describes starting at Microsoft, ?so I get to put on my suit of armour, get on my horse and take on Sony again?.

He also confirmed that acquiring Nintendo was a discussion point for Microsoft in the early days of Xbox. Speaking of early discussions with Steve Ballmer, CEO of Microsoft, Moore said, ?He wanted to know how I was going to win for Microsoft, how we were going to take on Sony, how would we compete with ? or acquire ? Nintendo.?

On that subject, it's come to our attention (via the good old Inquirer) that former Nintendo boss Hiroshi Yamauchi once reportedly told Ballmer, "Hey Ballmer why don't you suck my tiny yellow balls", when confronted with a proposed buyout. 100% true, we're sure.

Maybe someone ought to remind Moore that he's head of EA Sports now and actually has to work with Sony...