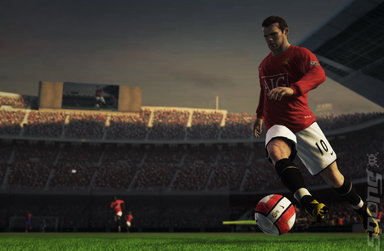 All Images (2) »
With Konami announcing loads of tie-ins and deals for PES 09 today, Electronic Arts is not to be left behind; it has just dished up details of its new online mode in FIFA 09 on the Xbox 360 and PS3. The mode is called 'Clubs'. It does what you might just expect...

In a nutshell, it enables you to form online clubs. Up to 50 players can get involved in one club then field their strongest team in 'Be A Pro: 10 v 10 Online Team Play'. Yes, it's a brand new, technologically-based way for you to repeat your childhood experiences of never being picked, even though Fat Ronnie Sykes, with his asthma and one leg, has already been stuck in midfield.

All is not quite lost for the footy deficient, however, as more than one match can be played by a club at once. Maybe you can play in the E team.

This will all come with a worldwide league that will rank teams based on overall points, sticking them in a division. EA also tells us, ?FIFA 09 Clubs will enable Club Managers to scout rival players to identify a player that fits his or her squad, and then recruit them to join their club.? Quite how this will work has not been said.

EA has also said that a demo for the game is going live today. The FIFA 09 website states that the PC and Xbox Live versions are available now, while the PS3 version will be out later on.

The EA bunph for the demo runs as follows: ?Play as Chelsea, AC Milan, Schalke 04, Olympique de Marseille, Real Madrid or Toronto FC (MLS) and discover a football experience that matches the complexity, finesse and beauty of the real-world game before it ships to stores world wide in October. In addition to playing an exhibition match, the FIFA Soccer 09 demo enables new gamers to FIFA to practice in the Arena and view tips on basic or advanced gameplay techniques. The Xbox 360 and PlayStation 3 demos also enable gamers to adjust and customise tactical settings through the feature innovation Custom Team Tactics."

In other footy news... well, loads of stuff is happening on the PES 2009 front. Read all about it here.

You can find out more about FIFA 09 here.
Companies: Electronic Arts
Games: FIFA 09