Just when you think it's a job well done. 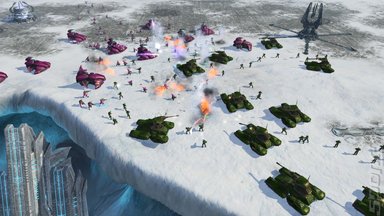 So, you've worked and worked on a big name game. You've got funds from a huge, enormous company. You're preparing for your part in Crunch Time so you've warned your family and friends that they won't be seeing you for a while.

Then the email comes around saying something like, "Thanks Employee Y-12123, but due to financial reasons not to do with Zune or anything, we will inviting you to enjoy the challenge of new employment vistas outside of the confines of our studio as soon as we get this game out of the door. It's been cool."

Or something like that. This would appear to be the case for devs over at Ensemble Studios once the long-awaited Halo Wars is completed. According to a report on gamespot, Microsoft has stated:

"The team at Ensemble has made invaluable contributions to the games industry with their Age of Empires and Age of Mythology games and with the highly anticipated release of Halo Wars.

"This decision does not reflect at all on Ensemble?s talent or the quality of Halo Wars--in fact, many people who have had a chance to test drive Halo Wars agree that it is on track to being a fantastic game."

Good news? Apparently the "leadership team" will form a new studio and "Microsoft is working to place as many Ensemble employees who do not move to the newly formed studio".

According to Phil Spencer, head of Microsoft Game Studios, speaking to gamesindustry, this is all a very sensible decision and does not indicate that - after Microsoft's split with Bungie as the Halo series grows old - the company is pulling away from gaming. Spencer states that the Ensemble decision was "the right thing for our business at this time". He also wants to emphasize that, "...the overall investment Microsoft is making in videogame development is not diminished, and we will continue to bring in talent to work on titles and franchises where we'll see the most ROI."