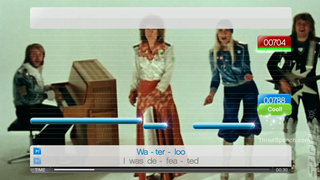 All Images (2) »
As one door closes on Singstar, another opens. Yes, in the same week that saw long-time Singstar producer, Paulina Bozek, leaving for Atari, the franchise gets to woo fans of Swedish pop sensation, Abba.

That's right, apparently - and we really cannot be bothered to insert a bunch of Abba puns in here - fans of 1970s band will be able to annoy everybody else by standing around their PS3s and PS2s and belting out such hits as: Mama Mia, Waterloo, I've Lost the Will to Live, Please Make It Stop, What About Singstar Cradle of Filth?, Dancing Queen and Gimme! Gimme! Gimme! (A Man After Midnight).

The game is apparently, "being developed in full collaboration with ABBA" - which is strange because we thought all of Abba hated each other, apart from the boys, who love Catherine Johnson.

Included in the agreement is "...a window of exclusivity for disc-based PlayStation titles until December 2009". So, all you Wii and Xbox owners will have to wait.

“We are thrilled to be collaborating with ABBA to bring their tracks to SingStar this Christmas,” said David Reeves, President, Sony Computer Entertainment Europe.

Lucian Grainge, Chairman/CEO of Universal Music Group International, commented: “ABBA have joined that elite club of musicians and artists whose popularity only grows with time, as new generations enjoy some of the most memorable music ever made. SingStar ABBA will have the world singing along again.”

No one from Abba said anything whatsoever.

For those of a less kitsch and/or camp frame of mind, it's also been announced that SingStar Country will be available in the USA on October 28th with "Leading Country Stars Brad Paisley, Gretchen Wilson and Alan Jackson", but no Steve Earle or Dixie Chicks as far as we can see.

Here, as far as I can see are the current ABBA Rules:

Nooo.... really, I'm just being an old curmudgeon with no sense of pop music genius. Abba does indeed rule, and so does Andrew Lloyd Webber and Cher.

that's all very well, but does your mother know?

that's all very well, but does your mother know?

"Hasta Mańana" to SingStar then.