The UK Charts: Spore Aliens vs Tiger Woods vs Mercenaries

Which EA title will it be? 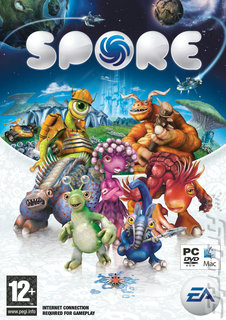 Electronic Arts, unsurprisingly, has taken the top spot in the Charts this week. What might befuddle you a bit is just how the publisher has done it. The natural assumption would be that its game that has been receiving galactic levels of hype for the last billion years, Spore, is sat pretty at Number 1. That would be fairly reasonable, but wrong. Mercenaries 2: World in Flames is at the top.

It would seem that we're all fuel whores and that causing chaos by giving away free petrol during the London rush hour works. The Xbox 360 version grabbed 60% of the sales, the PS3 got 33% and the PS2 got the rest.

Last week's Number 1, Tiger Woods PGA Tour 09 (another EA title), has been knocked to Number 2, meaning Spore is left hanging 1,162 at Number 3. Spore accounts for 53% of all full-price PC games sold this week.

The rest of the Top 10 is all just minor shuffling. Nintendo still has a strong presence with Wii Fit at Number 4 (down one place), Mario Kart Wii at Number 6 (down four places) and Wii Play down two places at Number 7. Meanwhile, SEGA's Mario and Sonic at the Olympic Games is still kicking around the Top 10 with a drop of two places to Number 8, despite the fact that athletic cock-waving event being over for two weeks now.

Also new in the Top 40 are Microsoft?s Rare-developed candy gardening sequel, Viva Pinata: Trouble in Paradise at Number 23, Deep Silver's S.T.A.L.K.E.R. Clear Sky for the PC at Number 25 and Square Enix's Infinite Undiscovery for the 360 at Number 28. The second week of sales for a couple of DS releases from Ubisoft and Atari serve the publishers well. Imagine Teacher breaks in at Number 31 and Driving Theory Training scrapes a pass at Number 39.

Next week, watch out for a sales surge for Rock Band as it hits the PS3, PS2 and Wii.

nate 10 Sep 2008 17:35
1/1
Spore was a single-platform release so comparing it directly to mercs 2, a multiplatform release, is a little murky.
Posting of new comments is now locked for this page.