Still no branding for the guitars 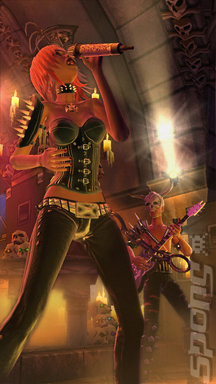 Update: Discussing branding for Guitar Hero World Tour an Activision representative has just confirmed to SPOnG that "There will no branding on the peripherals themselves."


Activision has announced the instrument and equipment companies that will fill the branding void left by Gibson in Guitar Hero World Tour.

Gibson, which had its branding featured on the guitar peripherals for previous entries in the Guitar Hero series, has been notably absent in the marketing and press materials for GHWT. This is no doubt due to legal wrangling over patent infringement relating to the controller.

While Activision has secured some branding to add a touch of authenticity, however, the peripherals remain without a real-life counterpart. An Activision representative told SPOnG, "The branding will only be in-game."

The game also lets would-be rockers do their rocking in venues such as Amoeba Music, Live Nation?s House of Blues Sunset Strip and San Francisco?s AT&T Park. That's virtual recreations, of course. If it were the real venues they'd get too crowded and there would be all kinds of fire hazards.