Microsoft has blood on its hands. 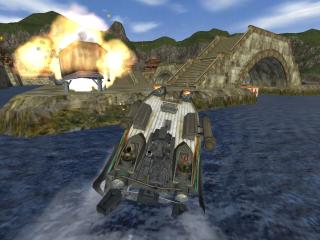 All Images (2) »
Blood Wake? From the title, you could be forgiven for thinking it?s just another mediaeval combat/hack and slash/role-playing epic. Further investigation into this upcoming Xbox title reveals a description elsewhere on the web as ?Doom in a boat?, and that should be enough to make any gamer sit up and take notice.

Blood Wake is a fast action combat game, fought with powerful boats and big, big guns. Boats engage in combat with other boats, forts and shore-based batteries in a range of exotic and dangerous locations. You play a Naval Lieutenant who is betrayed by an evil kingdom (a-ha, I knew that mediaeval combat element was around here somewhere). With the help of an outlaw gang of sea-raiders (that?s pirates to you an me) you must overthrow the devious army and restore order to the land.

So it?s not exactly Captain Birds Eye and his band of merry schoolchildren: it?s more like The Guns of Navarone to the power of ten. Blood Wake features many different types of craft, such as catamarans and torpedo boats, and some really heavy artillery (chain guns, mines etc.) for a truly explosive gaming experience. The game modes look like a good deal of fun too, with split screen multiplayer mode, deathmatch, team deathmatch and bot-battling in single player mode.

Blood Wake is in development at Stormfront Studios and will be published by Microsoft.
Companies: Stormfront
Games: Blood Wake