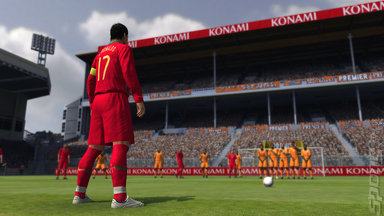 All Images (4) »
A new, limited edition Xbox 360 controller has been confirmed for release to complement Pro Evolution Soccer 2009.

The new pad will feature a 32-direction D-pad to provide better control over the beautiful game. The one that's been seen also comes in a lovely shade of green, the colour of diseased grass. Otherwise, it'll do everything your standard 360 controller does.

The pad emerged at Konami's Leipzig booth next to PES and has since been confirmed for an October 24th release date. No launch date has been confirmed for PES 2009 as yet (although Amazon lists it as October 17th), but it wouldn't be unreasonable to speculate that the game may also come out on the 24th.

You'll have to excuse SPOnG for a moment of smugness as we tell you that the pad will only be released in Europe, Asia and Latin America at that time. Sorry, North Americashire. Love footy more!

All hope of seeing the controller in the US isn't quite out of the window, however. It's also been said that the pad was designed to work with Street Fighter IV, so it could be re-released alongside the Capcom beat-'em-up.

While we're on the subject of PES, you might want to check out these new screens for the upcoming version. You'll find more on SPOnG's dedicated game page.

SuperSaiyan4 26 Aug 2008 11:13
1/1
I saw a pic on the net of the new controller it looks exactly the same as the regular controller but in green, I guess the truth will be in the D-Pad.
Posting of new comments is now locked for this page.