Cross-game peripheral functionality on the way 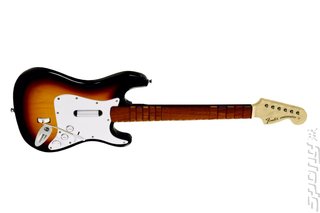 Good news, all fans of the plastic guitar. Sony has said that the peripherals for upcoming instalments in the Guitar Hero and Rock Band, as well as Konami's Rock Revolution series will have cross-game functionality.

In a post over on PlayStation Blog, Michael Shorrock (director of publisher relations here at Sony Computer Entertainment America) tells us that, "For the past several months, we have been working closely with Neversoft and Activision, Harmonix and Konami to ensure that PlayStation 3 guitars and drum sets will all feature a basic level of gameplay compatibility."

Getting more specific, he goes on to state, "A few specific examples include: Guitar Hero: World Tour?s guitars and drums will work with Rock Band 2 and Konami?s Rock Revolution software.

"And yes, you guessed it, Rock Band 2?s guitar and drum set will work with Guitar Hero: World Tour and with Rock Revolution.

Additionally, he points out that both GHWT and Rock Band 2 will be compatible with the SingStar microphones.

Frankly, it makes sense for all concerned. With increasing numbers of similar rhythm games hitting the market, the cost of new peripherals could prove prohibitive in getting gamers to invest in more than one franchise.

Shorrock also tells us, "We?re still working hard to ensure compatibility between the Guitar Hero and Rock Band titles currently on the market, and we hope to have an announcement on that shortly."

There will remain features exclusive to each game that might not work with the other's controller, but SPOnG reckons we can all safely say that this is a step in the right direction.

This statement amounts to Sony playing catch-up with MS. AFAIK, MS has always had a policy concerning interoperability of 360 peripherals and didn't have the same controversial issue that cropped up on the PS3. (GH guitars not working in Rock Band) This isn't a leg up for Sony, they're "still working" on issues that MS never had and may never have, maybe Sony could gain an advantage by forcing "retroactive" compatibilty*, but how much mileage will you get by making sure that your Rock Band 2 peripherals will work with Guitar Hero 2?

*first they have to get the present sorted