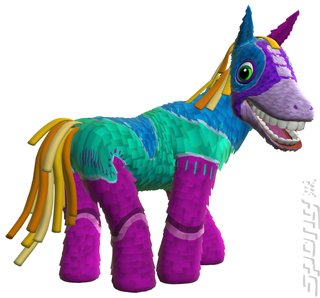 Rare has gone and broken release date news for the UK and European (you can debate that in the Forum) versions of both Viva Pińata: Trouble in Paradise and Viva Pińata: Pocket Paradise. The developer is, however, savvy enough to caveat the days of release, stating, "But don't blame us if it all goes wrong. We're just passing on what we've been told, man."

Sensible chaps those Rare lot - as you can tell from our interview with Pocket Paradise mainmen, Gary Richards and Joe Humfrey.

Says Rare, "The current schedule has both VP: TIP (from Microsoft Game Studios) and VP: PP (from THQ) launching in those territories on those dates. Then VP: PP begins to filter through to the rest of the world on the 11th, with VP: TIP not far behind."

And if all that wasn't enough, there's also a new and amusing Pińata related video for you to guffaw at. It even stars Louise Ridgeway the voice of "the real Leafos" and the Evil Editor is smitten.

You can see it below: