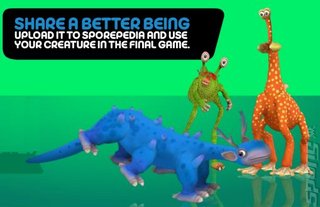 Reuters is being a little harsh this afternoon. Harsh if technically correct. It states that, "Struggling with tepid sales and flagging interest from gamers, loss-making EA is rethinking its traditional ways of developing and marketing games."

One of these ways is to pimp out games - specifically Spore - to movie makers... apparently.

According to Wright, "With Spore, we're looking way outside the game space, such as TV, movies, etc. We're basically planting the seeds to spread Spore out to a much wider group of people than would ever play a computer game."

Scarier than the idea of George Clooney, Julia Roberts, Matt Damon, Brad Pitt and others playing Spore creatures could be Wright's other idea. A game that captures your 'metrics'. Says Will, "The computer could observe each player and capture a lot of metrics, which could be used to change the game so that it becomes personalised for him - his game becomes a reflection of who he is internally".

Firstly, all gamers are not blokes, yes it's true. Secondly, do you really want your computer observing you and capturing your metrics? These will enevitably be sold on to advertising people for in-game Spam. Your thoughts... to the Forum!

deleted 13 Aug 2008 19:15
1/4
Since when are gamers not all blokes!!!! thats bloody news to me, as we know womens intake of information is scrambled and full of hullaballoo, and as such letting a women into the gaming space Strictly reserve for men at my local WMC could cause havoc with there gentle and caring minds! there is only one kind of women that plays games, if you know what i mean, `wink wink nudge nudge`....continued in Eric Idle style

STOP THIS AT ONCE! or i shall be force to write to my local MP!

SuperSaiyan4 14 Aug 2008 07:50
2/4
Huh? You being sexist? I know tons of women gamers out there look at the PMS girls for example, my girlfriend is a girlgamer and she is pretty damn good...Too good in fact...*mumbles* she kicks my ass on Soul Calibur 4 *mumbles*...

Twoozle 14 Aug 2008 09:11
3/4
SuperSaiyan4 wrote:
Huh? You being sexist? I know tons of women gamers out there look at the PMS girls for example, my girlfriend is a girlgamer and she is pretty damn good...Too good in fact...*mumbles* she kicks my ass on Soul Calibur 4 *mumbles*...

Such a sweety. You know tons of woemn gamers? I know at least 10 grams of men with the sense to shake and drop the lid. I know 3.2 pints of lesbian Halo players.

Alyn 28 Dec 2011 02:08
4/4
What liberatnig knowledge. Give me liberty or give me death.
Posting of new comments is now locked for this page.