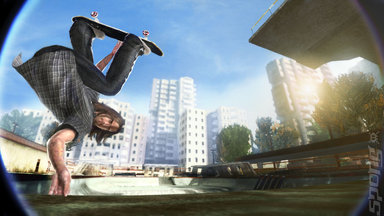 All Images (6) »
Electronic Arts seems determined to slip skate.2 out with ninja-like stealth. Fortunately, someone clearly couldn't help themselves and has put out this handful of screens, along with an evolutionary piece of artwork showing us how we went from being apes to skaters.

skate.2 was announced with barely a whisper - the game simply got a sentence at the end of the press release for the series' Wii and DS outing, Skate It. Little fanfare has been made about the title since, but we do know that the game takes place five years after the events of Skate It, when an event... for the sake of not dishing up spoilers we'll say 'changed'... the city of San Vanelona. Since then, a mega corporation called Mongo Corp has swooped in and rebuilt the city. So - plenty of new places to skate.

Oh, and EA says there will be double the number of tricks than in the first one. Double!