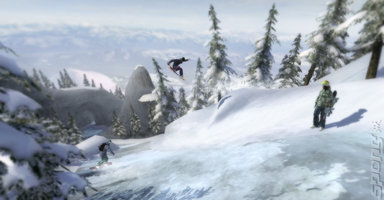 All Images (4) »
Ubisoft has flung a new video for Shaun White Snowboarding out into the universe. Since summer doesn't seem to be yielding much delight, SPOnG's turning its attention towards the possibility of a good winter. With that in mind we thought we'd best show you the video.

The video in question was aired on ESPN over in the United States of Americashire during the X-Games because, you know, they're all extreme and that.

Mark SPOnG, our resident snow fiend, took a peek at the game during Ubidays this year and was suitably impressed by the amount of terrain promised by Ubisoft. He's also optimistic about the Balance Board functionality that's included in the Wii version. It all looks rather promising...

You can see the video, along with some fresh screens, below. You can find more details on Shaun White Snowboarding - along with more new screens - over at SPOnG's dedicated game page.