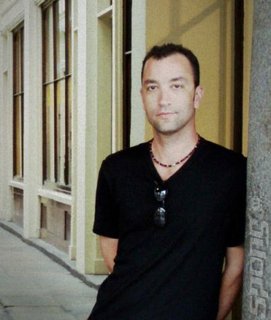 Doug Lombardi
Speaking in an interview Valve's marketing director, Doug Lombardi, has said that if anyone is interested in buying the software house, he's "happy to have that conversation."

That doesn't mean that Valve's necessarily courting suitors, of course. "By the same token, the company's doing pretty well, and we're really happy with what we're doing?, Lombardi went on. "So we'll see. I mean, anything is possible."

OK, so we shouldn't jump to any conclusions just yet. That said, looking at some of the Valve man's comments about Electronic Arts, which is currently trying to buy Take-Two, SPOnG can't help but wonder if they'd make a happy couple.

Lombardi is happy to acknowledge that Valve had misgivings about its distribution deal with EA, saying, "... we set up the deal so that it turned out that if EA was this evil empire, that it wasn't going to last forever."

BUT (yes, there's a 'but'), Lombardi went on to say, "But it's turned out that all those scary stories - which, you know, maybe some of them were true, and maybe some of them are history; I don't know - haven't appeared to us; we haven't seen the boogeyman."

Valve's deal with EA comes following what Lombardi calls ?the Vivendi divorce?. Vivendi previously published Valve games such as Half Life 2, but between 2002 and 2005 Valve and Sierra, a label of Vivendi, were involved in a series of court cases surrounding copyright infringement and breach of copyright. Following Vivendi Games' merger with Activision, Activision Blizzard represents EA's main competition for dominance in the arena of third-party games publishing.

So, we have EA ? a publisher that has been aggressively pursuing acquisition in the form of the Take-Two deal (and may have some cash to spend if the deal doesn't go ahead), as well as the likes of BioWare and Pandemic. Then we have Valve, a successful software house with some proven IP and a digital distribution platform that could serve EA very well. They seem to get along. If SPOnG were in the business of matchmaking, we'd be giving them both a wink and a nudge...

deleted 5 Aug 2008 18:33
1/2
I cant help thinking your headline should of been wouldnt EA buy valve? seriously it would be easier to name companies EA would have interest in buying. of course when that happens the robot overlords will be here and My DNA sequence will of been used in vain by aliens.. clones .. and such.

TakeYourFuckingTimeValve 2 Sep 2011 02:03
2/2
I hope EA buy out valve, fire that fat f**k Gabe search him for half life 2 episode 3 that's been hiding on a hdd in a roll of his fat and actually release the f**king thing
Posting of new comments is now locked for this page.