The Charts: SoulCalibur IV Sticks the Summer Knife in 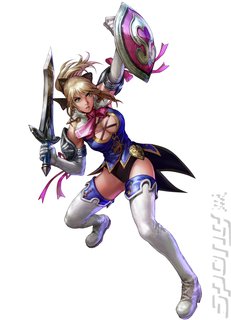 In a move that will shock no-one Ubisoft and Namco Bandai have slashed their way in at the top of the Chart with the Xbox 360 and PS3 seated SoulCalibur IV.

The fourth instalment in the series is the first to top the Charts since SoulCalibur II nabbed the top spot for one week all the way back in the dank, dark depths of time (September 2003, if you can imagine it) with its PS2, Xbox and GameCube outing.

Chart-Track calls this the ?fastest selling in the franchise? (read: best-selling in a launch week), with the PS3 version outselling its PS2 predecessor (numéro trois, which was a platform exclusive) in launch week by three-to-one. This is also the fastest selling traditional beat-'em-up on the PS3 or 360.

Microsoft fans ? if you want something to beat your Sony brethren around the head with, the 360 version sold best with 56% of sales.

Now, you might want to say that as the only game of note released this week (or for a while) SoulCalibur IV was bound to top the Charts. You'd be right, of course. But that doesn't mean to say it had no competition from previous Number 1 incumbents. While Nintendo?s Wii Fit has been relegated to Number 2, it saw a 35% jump in sales, so SCIV didn't get to cruise in at Number 1 with no effort.

Similarly, Mario Kart Wii (a non-mover at Number 3) got a red mushroom sales boost of 25%.

THQ's Wall-E doesn't perform quite so well, sliding a couple of places to Number 4. THQ does well elsewhere, however, with Big Beach Sports clambering from Number 10 to Number 5. It switches places with LucasArts/Activision's LEGO Indiana Jones.

Oh - and Mario & Sonic at the Olympic Games is still in the Top 10 at Number 8, so you don't have to worry about water running in the wrong direction or anything.

Next week, watch for... Ah, we won't lie to you. There's little of interest coming out. Sierra's The Mummy: Tomb of the Dragon Emperor for the DS and PS2 might make a small dent...

You can see the Top 10 below (last week's positions are in brackets), or you can find the full Top 40 here.