PS3 and Xbox 360 Take on the International Motor Show

SPOnG visits The British International Motor Show and realises that E3 has a lot to learn. 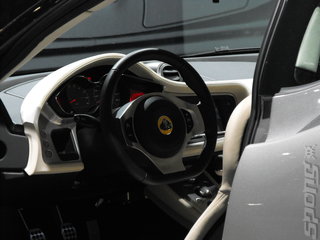 Get behind the wheel of the Evora
All Images (4) »
Most of the SPOnG staff like racing games; from Mario Kart to Motorstorm, we love to hurl our virtual cars around the track. Many of us also have an interest in actual, physical cars in the real world. It was with this interest in mind that we recently visited the British International Motor Show in that London's ExCeL exhibition centre.

E3 take note, this is what a show should be like. Loud music, bright lights, attractive booth babes and lots and lots of product on display for visitors to play with. ExCeL has 65,000 square metres of show space and it was almost all filled with manufacturers' stands. Honda, Vauxhall and Ford had the largest amount of space, with Honda's two-level area being particularly eye-catching.

However, we were more interested in the latest cars from Lotus and Nissan. The Lotus Evora was launched at the show, and what a looker it turned out to be. We're looking forward to throwing it into the corners in future Gran Turismo and Forza games, even if it's just for the pictures.

The Nissan GT-R is already in GT5 Prologue, as well it should be. Polyphony Digital was commissioned to design the GT-R's multifunction display, which can show loads of information about the car such as speed, acceleration and G forces. The Nissan stand even had a few PS3 pods set up with GT5P playing so that show visitors could get a feel for the GT-R's handling.

In fact there were so many PS3 pods set up around the show that you'd have been excused for thinking that Sony sponsored the event. Most of the pods were playing System 3's Ferrari Challenge, including, strangely enough, a couple at the Royal Navy careers stand. System 3 even had a booth of its own at the show - complete with babes and the company's own Ferrari race car - where visitors could pick up a copy of the game.

Another stand that was attracting a large amount of attention was the BBC's Top Gear stand, complete with the police cars the presenters designed for a recent feature. The attention could be put down to several factors: the TVs playing clips form the show, the fact that you could buy the current magazine issue for Ł1, the availability of "I am The Stig" T-shirts, or it could have been due to the dozens of attractive ladies, wearing said T-shirts and handing out the magazines. Auntie Beeb may be old, but she knows her audience.

As for the Xbox 360 - we know we saw a single one playing Forza.

All in all, the show was a great day out from the Underwater Castle, even if we had to go to London to experience it. It was a much better show than the last ECTS to be held at ExCeL anyway. See Tim? We told you we could tie it in to games.
Companies: System 3
Games: Ferrari Challenge: Trofeo Pirelli Gran Turismo 5 Prologue

SuperSaiyan4 4 Aug 2008 14:46
1/2
If Sony were to make a car we would be waiting 25yrs...Even then I am sure the contracts would have gone over to Microsoft as Sony know that according to them the consumer loves waiting and doesnt mind...

tyrion 4 Aug 2008 17:06
2/2
SuperSaiyan4 wrote:
If Sony were to make a car we would be waiting 25yrs...Even then I am sure the contracts would have gone over to Microsoft as Sony know that according to them the consumer loves waiting and doesnt mind...
Whereas, of course, Microsoft's car would appear before anybody else's, but would stop working randomly. Microsoft would deny there were any issues, but after a while drivers would be able to have their car replaced and would do so five times or more each.

The fuel tank would be tiny compared to the one in Sony's car, but Microsoft drivers would say they didn't mind pulling into a petrol station every now and then, besides it was only very long journeys that needed a stop or two.

Everybody would say the radio in Microsoft's car was better than the one in Sony's.