There's A Racing Game Coming To The Xbox...

...and you may have seen it before. 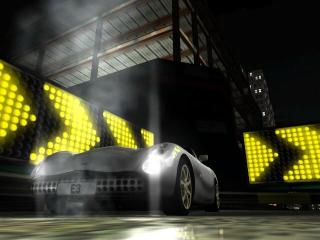 All Images (2) »
Big on technology but short on inspiration, Project Gotham Racing for the Xbox is a (very slightly) re-vamped version of the Dreamcast's Metropolitan Street Racer. The cars' handling is the same as Sega's title, which is no bad thing, and they are subject to the environmental mapping techniques used in Sony's GT3. The rainy effects and reflections from the water only look as good as (but no better than) GT3. Slowdown is evident on long straights where lots of detail is in view.

On the strength of their showing here on their home turf, Microsoft are going to have to go several extra miles to convince the people who really matter (the punters) that they can seriously compete in this volatile marketplace.
Companies: Microsoft
Games: Project Gotham Racing