A report from SPOnG's man on the ground 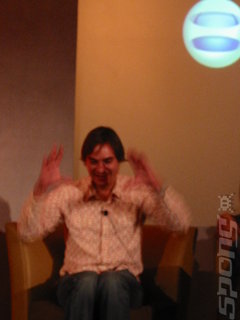 2K's Nate Wells gets animated
All Images (12) »
Sun, sand (well, pebbles), British seaside tradition and a whole big bunch of videogame developers. That was Brighton for the last few days with the advent of the Develop Conference, bringing together what we're told was over 1,000 of the games industry's best and brightest to talk development and business and enjoy the odd jar of ale. SPOnG was on hand, even if we can't quite be included in the category of 'the games industry's best and brightest'.

Following Develop Mobile and Develop Online on Tuesday the conference proper got underway on Wednesday. It was unnaturally, swelteringly hot, with the assembled industry happily switching from complaints about rain to complaints about the Hilton Metropole's apparent feeling that air conditioning is an unnecessary expense.

The rest of the day saw talks from Chris Satchell (chief technology officer at Microsoft), David Braben (founder of Frontier Games and 'the Elite guy') and Alex Evans (co-founder of Media Molecule, LittleBigPlanet) among many others.

Evening rolled around, the heat dropped off a tiny, tiny bit and the Develop Industry Excellence Awards. It turned out that it didn't matter too much that the outdoor temperature had dropped off slightly, since the awards were held in the hottest room in the history of hot rooms. There were sauna-goers cooler than the European games industry on Wednesday.

Still, Rockstar managed to keep things at least a little cool as they accepted somewhere around a billion awards (OK, four) without a word until the Grand Prix rolled around.

The Awards successfully softened everyone up for a slightly more relaxed day two. There wasn't even too much ranting when a fire alarm interrupted the morning sessions (including the keynote by Richard Lemarchand, lead designer at Naughty Dog of Uncharted fame and possibly the nicest man in the games industry). There was something ethereal about seeing the entire European games community slightly hungover, congregated on the pavement outside the Metropole, overlooking the sea.

The rest of the day brought talks and appearances by Damian Isla, lead AI programmer at Bungie, Chris Deering, Harvey Elliott, head of Electronic Arts' Bright Light studio and Charles Cecil, founder of Revolution Software. SPOnG could go on, but the list's as long as three of your arms (if your arms are the length of a giraffe's leg).

Oh, and there were free ice creams.