Up All Night with Le Mans 24 Hours

What?s coming up around the next corner? More sleepless nights thanks to Infogrames. 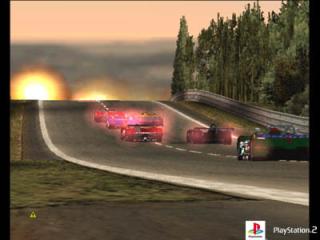 Louder than a Lister Storm but not as smelly, the Le Mans franchise is coming to the PS2 next month. Infogrames? original PlayStation version was one of the noisiest racers of its time, last year?s Dreamcast version was visually stunning, of course, and super-fast. E3 is the place to be for the unveiling of the PS2 version that, if it can combine the best elements of the previous two editions, fully deserves to be a chart-troubler.

Le Mans 24 Hours for the PS2 promises better graphics and sound than last time around, 12 authentically reproduced circuits, more cars to choose from, better AI from the computer cars and all the race modes and options expected from a next-gen racer.

A June release pre-empts Gran Turismo 3 by at least two weeks, maybe more. This means that Le Mans 24 Hours will be available to buy well before the racer you all want the most. Go on, give it a whirl, you won?t be disappointed.
Companies: Infogrames
Games: Le Mans 24 Hours