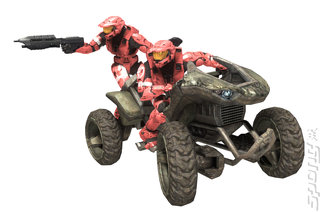 Bungie has confirmed that it has three projects in the works, although we shouldn't expect any big announcements in the near future.

On its website, Bungie states, "At the moment we do have three distinct projects underway within Bungie - some familiar, some not. Some on a closer horizon, some quite far off."

SPOnG likes the sound of that "closer horizon". Bungie's clear, however, that it's not spilling any beans in the immediate future. It also states on its website, "For the record, we have no plans to make any big announcements or huge reveals at PAX (Penny Arcade Expo, 29/08/2008 - 31/08/2008) this year. While we will have some Halo 3 multiplayer stuff for you to check out, this is not going to be the "big announcement" many of our fans are clamoring for. Rest assured that when the time is right, we will be making announcements and talking about the stuff we're currently working on."

Bungie was teasing a big announcement all over its website around E3, but was gagged by its publisher. Prior to that, rumours had been circulating that a new, grittier Halo title was in the works that wouldn't feature Master Chief.