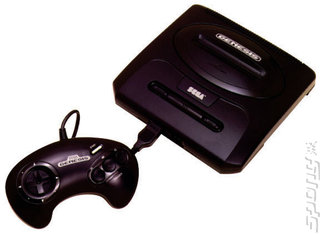 If you're prone to wearing spectacles with a rose tint, you might want to sit down and do a few breathing exercises. Everyone's favourite defunct hardware manufacturer is getting one more chance to shine and the good old days of 16-bit are coming back. Below, you will see the 16-bit Megadrive (that's Genesis to our not-English cousins) handheld console, brought into the world by Blaze International.

Blaze International tells us, "All very 90?s retro chic and far less damaging to your reputation than singing along to Color ME Bad (sic). Though not everything from the 90?s should make a comeback...are you listening Spice Girls?" Ha! It made a joke about the Spice Girls! Brilliant! (Color Me Badd was a male R&B pop group. Mark SPOnG looked it up).

deleted 24 Jul 2008 16:20
1/4
so very very cool, cept Picodrive + PSP does it harder, faster, longer and stronger! but all the same i wouldnt mind one just to you know show off with or in fact maybe buy me dad one im sure he would love a revisit to golden axe, ahh the days of me dad lay on the couch watching me play!! sigh

Clonk 24 Jul 2008 16:40
2/4
World's first handheld MegaDrive? Hmmmm, then what was the Nomad?
more comments below our sponsor's message

I wonder if this is the same bunch that has been doing handled video game systems for $30, they were recently talking about a 32bit version (or was that 16 bit). There are a few companies. It would be good if these people could do a version that emulated everything with Java or Linux compatibility thrown in for new games.

I wish we could arrange a Linux/Java/Emulated phone Open Hardware style, as a standard like Linux and get phones that we actually want manufactured for the prices we want.