The Charts: LEGO Indy Makes a Break For It 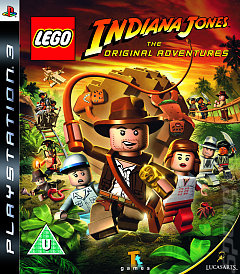 After a four week break, LEGO Indiana Jones has made it back to Number 1, climbing up one spot from Number 2. This marks the seventh consecutive week since launch that Indy has hung around the Top 10.

The release of Wall-E in the cinemas has benefited THQ's tie-in, with the game having climbed an impressive 14 places to Number 2 and found itself just 46 sales away from the Number 1 spot.

We don't have a Nintendo title at Number 7, but it almost might as well be. SEGA's Mario and Sonic at the Olympic Games is sat there, up three places. SPOnG's relieved every week that we see the game in the Top 10 after our worlds were turned upside down a few weeks ago by it dropping out. The milk turning to blood we could handle, but the water running uphill unnerved us somewhat.

SEGA's other Olympic tie-in doesn't fare so well, with Beijing 2008 dropping six places to Number 14. There might be a lesson to be learned there...

Activision?s Guitar Hero: On Tour ? which is exclusive to the DS ? is denied a Top 10 place in its début week, but only by 57 sales. It sits at Number 11.

Ubisoft's Sports Party for the Wii is this week's biggest climber, tootling up 16 places to Number 13.

Next week watch out for the DS release of Racedriver: GRID and Buzz! Quiz Master on the PSP making modest dents.