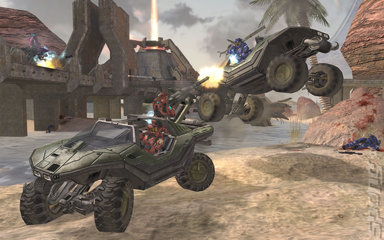 Bungie, while not having anything official said about its projects at E3 this year is working on a new Halo project according to MTV at least. It also remains exclusive to Microsoft.

MTV's Stephen Totilo spoke to Microsoft's Don Mattrick about why there was not news on Halo Wars at E3 - strange to us given the trailer and screens from yesterday - and Mattrick told him not to worry.

Mattrick then went on to tell him about Bungie's latest project. It is Halo related, it is not Peter Jackson or Halo Wars related. According to Mattrick, "The Bungie game is something else." Seeing as rumour and speculation were already rife regarding Halo 4 as long ago as July 4th, this isn't too much of a surprise.

What is a surprise is what Bungie's Luke Smith, told Joystiq, "We still have an exclusive publishing agreement with Microsoft, as we confirmed when we announced the split last year. That arrangement has not changed." It's confusing because we had thought that the two companies had separated.

So, we looked back at the original press release regarding the fact that Bungie was leaving Microsoft. This stated that, "Microsoft will retain an equity interest in Bungie, at the same time continuing its long-standing publishing agreement between Microsoft Game Studios and Bungie for the Microsoft-owned ?Halo? intellectual property as well as other future properties developed by Bungie." It's now clear that means that Bungie isn't going to be making games for anybody else... or is it?

That question arises due to the fact that the head writer of the Halo series, Frank O'Connor, left Bungie to go and "work more closely with Microsoft on Halo" in May. You've got to ask, given that Bungie and Microsoft are exclusive to each other (sweet) on the franchise, why Frank would need to leave.

It's all very confusing...

SuperSaiyan4 16 Jul 2008 12:31
1/1
'You've got to ask, given that Bungie and Microsoft are exclusive to each other (sweet) on the franchise, why Frank would need to leave.

It's all very confusing...'

No its not confusing the answer is clear as day, before Microsoft were always on Bungie's case in regards to Halo they would have some guy go to their offices and constantly nag them etc we all know the deal with Halo 2 or should do...Now Halo 3 didnt turn out the way it should have done.
Remember the Halo 3 trailer with commentary developer video? The bit where they zoomed in on Masterchiefs armour and one of the guys says and I quote 'This is our benchmark, thats what we're aiming for'

So no why not have Bungie's own guy Frankie to work with Microsoft who will in turn instead oversee Bungies next Halo work? Who best to know how Halo is turning out than one of their own?