Master Chief is loved after all? 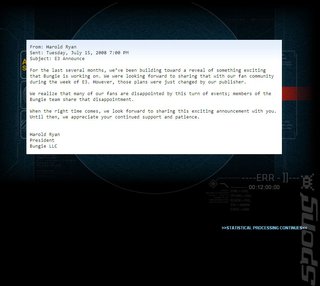 The note.
Bungie - which is rumoured to be working on a new Halo title - has been gagged by 'its publisher' according to its own website.

As we reported on July 14th, news was circulating that the Halo developer is engaged in a project that will not feature the Halo icon Master Chief. It had been expected that an announcement to this effect was going to be made at E3. In fact Bungie's own site had been running a countdown clock as its home page.

With the countdown done, a note from one of Bungie's 'Grizzled Ancients', Harold Ryan was 'tacked' to that same home page. Aside from being the grizzled and ancient Ryan is, of course, the company's president. The note included this message:

"For the last several months, we've been building toward a reveal of something exciting that Bungie is working on. We were looking forward to sharing that with our fan community during the week of E3. However, those plans were just changed by our publisher".

Bungie isn't exactly shy of pulling the odd practical joke - LEGO Halo or even Pimps at Sea anyone? Therefore, this whole countdown and 'cancellation' could simply be another attempt at a funny.

The wording of the note is also deliberately (we hope) ambiguous - leaving a great deal to the imagination. Also seeing as Bungie split from Microsoft in October last year (more than 'several months' in anybody's language) it's actually possible that Microsoft and Halo aren't even part of the equation.

One clue could from E3 could be that... Bungie team members were observed attending the Sony presentation yesterday.