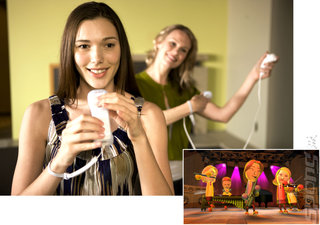 All Images (49) »
The dust from Nintendo's E3 keynote is on its way to settling and in amongst it all were a handful of new announcements. SPOnG brings you the skinny below.

First up, we've got Wii Sports Resort. If the title wasn't a give away, it's a sequel to Wii Sports. You know what to expect - the same thing you got from the first game. But more! Some of the sports included (and we use the term 'sports' loosely) are 'Sword Play', 'Power Cruising' ("racing a water scooter") and 'Disc Dog' (which involves accurately tossing a disc to a cute, Mii-like dog"). The game will make use of the just-announced MotionPlus accessory. For more information, click here.

Breaking further from the Wii norm is Wii Music. The game will offer up upwards of 60 instruments, running from the guitar to the marimba and all played using the Wii's control system. Where other music games place the emphasis on dead-shot accuracy, Wii Music encourages players to improvise, changing the score as they do.

Players will also be able to create jam recordings, then send them zipping backwards and forwards across the internet using WiiConnect24.

All that said, the thing that caught SPOnG's eye is the drums, which make use of the Wii Balance Board. We just like to bang. We could go on and on about the feature set, but instead we suggest you click here if you want more.

Next up we have the first appearance of the Animal Crossing series on the Wii - City Folk. Basically Nintendo wants to send you on holiday without leaving your living room. It seems like a pretty lazy way to take a holiday, but SPOnG doubts you'll find a city break as laid back as this sounds.

Up to four players can get involved in your house and three friends can be brought in over the Nintendo Wi-Fi connection. The game also supports WiiSpeak support (more on that in a moment). You can read more here.

Wii Sports Resort will be out in Spring next year, while Wii Music and and Animal Crossing: City Folk will both be out in time for Christmas.

Last up we have a piece of hardware going by the name of WiiSpeak. The device will offer online chat, but instead of being a headset for one-on-one communication, it sticks with Nintendo's social gaming ethos. It's a speaker that sits on top of your Wii sensor bar and allows everyone in the room to chat.